Arrow symbolism is everywhere — here's what it means. 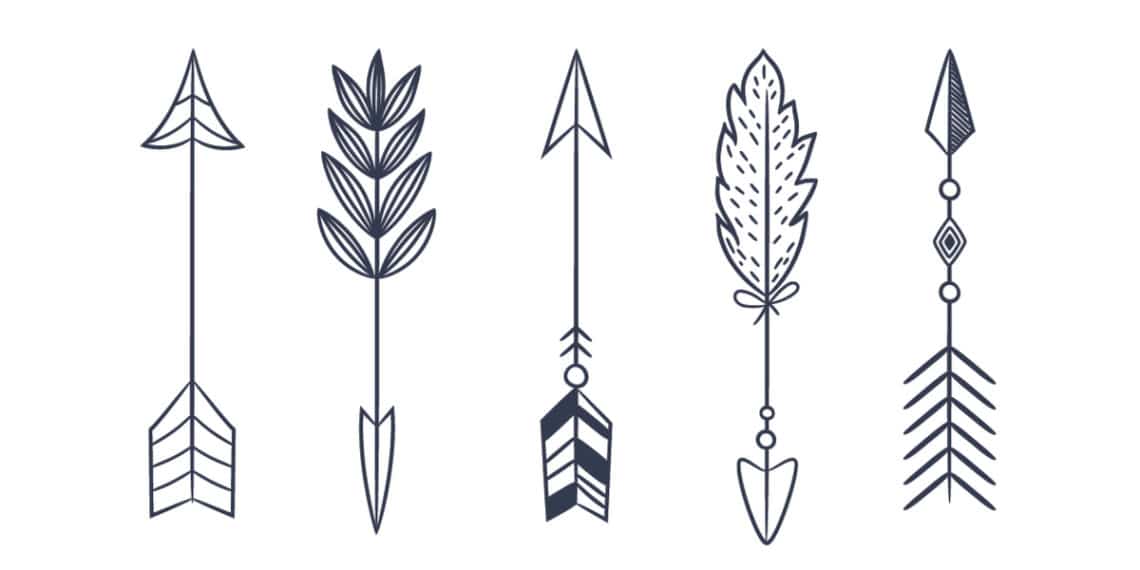 Across cultures, arrows are a directional symbol. This means they’re used to show where things are. Used this way, arrows are generally very simple. Since their primary purpose is functional, they’re usually to the point (pun unintended).

The current simplified arrow was developed in the mid-1800s. At that time, the tail ornamentation was removed, keeping the triangular head or diagonal lines converging to a singular point. This brought arrow depictions down to their essential form.

Today, lines with arrows to represent movement are a common symbology across cultures. Flight paths, weather patterns and more are indicated this way.

To reflect specific concepts in logos

In some corporate logos, arrow symbolism reflects a specific concept. This can be about the product or service.

For example, the FedEx logo has an arrow hidden inside it. This represents transporting and moving packages and shipments — which is the company’s business.

The arrow is very important in Native American culture. Because hunting and gathering were so important in this culture, arrows had strong symbolic and philosophical meanings.

For Native American peoples, arrows meant life. They were tools for hunting food to feed their families and weapons to protect themselves. Thus, arrows are symbols of both war and peace in Native American culture.

Its depiction and placement change an arrow’s symbolism in Native American culture. A few basic arrow symbolisms are:

The five founding tribes of the Iroquois League were also represented by a bundle of five arrows. This symbolized the League’s united strength. While a single arrow is easily broken, a bundle of arrows remains strong.

Some people use Native American arrow symbolism in tattoo designs. If you’re interested in a Native American-inspired tattoo, you might consider a foot tattoo. However, please be sure it’s appropriate to do so.

Rudra, the Hindu god of the winds or storms, is associated with arrows. His weapons include a bow and arrow. Additionally, he is called “the archer.”

As a symbol of love

In Roman mythology, Cupid used arrows to piece the heart with love. So, an arrow through the heart represents love. Today, this is a common Valentine’s Day motif.

During the 19th century, Cupid was often the instigator of love. He used his golden arrow to the heart to inspire love. Interestingly, his other arrow, which was made of lead, inspired hate.

To symbolize having kids

As a symbol of war

Arrows were also symbols of war in Roman mythology. Both Apollo (god of the Sun) and Artemis (goddess of wild animals and hunting) used arrows for hunting. While most people don’t use arrows to hunt anymore, arrow symbolism for war persists.

Mithras was a Roman god. He was the god of contracts, a judicial figure, all-seeking protector of Truth, and guardian of cattle, the harvest and the Waters. Roman coins showed him with an arrow.

Mithraism was the worship of Mithras. It was a rival to early Christianity; because of this, Roman Christians. The religion was eliminated by the end of the 4th century.