Arlene Silver is always in the news. 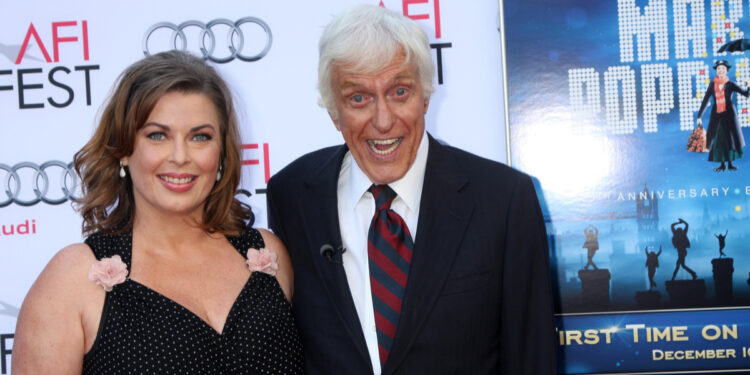 Arlene Silver, a fab make-up artist by profession, married actor Dick Van Dyke in 2012. He is a singer, entertainer whose career span has received tons of awards and admiration for a decade. The couple came into the limelight due to their 46-year-old age gap difference. But love is blind as they say and age is just a number. Recently the couple was last seen walking around in Malibu. Dick was fit fine and healthy. No wonders his exercise routines kept him healthy even at such older age. Arlene looked stylish and fit in her black leggings.

Arlene Silver is Dick Van’ Dyke’s second wife. He was previously married to Margerie Willett whom he has got 4 children. Apart from Arlene and Margerie he also had a long-term relationship with Michelle Triola for 30 years until she died in 2009. However, his love for Arlene Silver is surprising for citizens but Dick Van and Arlene don’t care. Arlene Silver is quite active on Instagram and TikTok. She is funny and has a sense of humor. Here are some more facts about Arlene Silver.

Arlene Silver is a Popular Make-up Artist in Hollywood

Before stepping into the make-up profession, she worked as a production assistant in the art department for the movie Carolina which was released in 2003. Between 2007 to 2015, she was credited as a make-up artist for several video shorts. Van’s make-up was done by Silver for two episodes in the TV series, Murder 101. However, records state that she does not hold a license for an esthetician in California. According to public records, she did acquire a license in 2004, but it expired in 2020. The license has not been renewed since then.

Her Childhood was Spent in New York

Born on 21st September 1971 in New York, the talented artist spent her early childhood in the Bronx. In 1981, her family moved to California and there she completed her education at California University. In one Instagram post, she stated that when she was 10 her mother accepted the job offer at City National Bank. Joking about herself in one of the posts on Instagram she said, “Boss has a pool party. Debut the OP two-tone two-piece, wrapped in a bunch of towels. My beet red fluster can’t permeate my ghostly glow.” She had a flair for make-up since a young age and is also a hard worker.

See also: The Best Makeup Mirror Ideas For Your Vanity

How the Couple Met

Arlene and Van were friends for several years before they eloped into a romantic relationship. They met at SAG Awards in 2006. According to Huffington Post, Arlene was supposed to do make-up for Van. He approached her in the reen room and introduced himself to Silver. The couple soon became friends. Arlene confessed that she did not know about Van’s much work, but also did not bother about his age. Recalling her first conversation with Van, she said, “Weren’t you in Mary Poppins?”. They instantly got hit off but they initially got eloped as friends and their friendship continued to remain forever.

Silver said that their relationship is like a fairy-tale romance and both are enjoying their relationship like a second childhood. Based on their social media accounts and interviews, they are having fun and enjoying each other’s company. Friendship is the key to keeping their relationship strong is what Silver feels. According to a post, Arlene says that Van is her prince charming, is open-minded, immature but in a good way. She is completely awestruck by him. Van also stated that marrying Silver is one of the smartest moves he has ever made and she is very mature for her age.

Their Wedding Sparked the Limelight

Even though their wedding was low-key, Silver’s Fuschia dress at Malibu was much appreciated. The couple tied the knot on February 29, 2012. She posted a throwback photo on Instagram. She looked gorgeous and the flower in her hair was simply elegant.

Why You Should Invest in Swivel Chairs For Your Home

How to Dry Flowers?

Vivian Lake Brady: Everything you Need to Know About Tom Brady's daughter