5 Best Songs of Lisa Marie Presley that celebrate her life 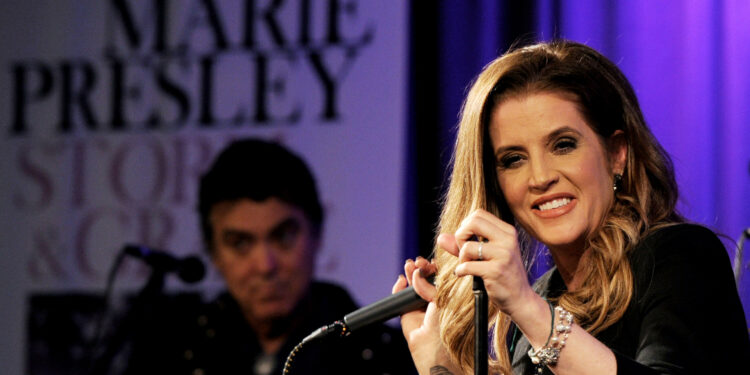 The first month of the year has already received its letter of woe as Lisa Marie Presley, the only daughter of rock’n’roll legend, Elvis Presley passes away at the age of 54. The singer and songwriter suffered a cardiac arrest while at her home in Memphis, Calabasas. Lisa Marie Presley’s presence at the Golden Globes just a few days ago was a major highlight as she celebrated the mind-blowing performance of Austin Butler as Elvis. The news of Lisa’s death has dimmed the splendour of the globes by several shades, as it marks the end of an era.

“It is with a heavy heart that I must share the devastating news that my beautiful daughter Lisa Marie has left us,” said Prescilla Presley in a statement.

Life as the Daughter of a Legend

Elvis Presley doesn’t need a special description, because his art speaks for him, even today, almost a decade after his death. When art dominates life, the latter frequently takes a back seat because it is difficult to imagine an ordinary life for someone who is on a pedestal.However, Elvis Presley did have a life, complete with a family, and a daughter he adored. Lisa Marie Presley, the only child of the rock-n-roll legend who turned everything he touched to gold, lost her father at the young age of nine. Although brief, their relationship was rather deep, and Lisa Marie only has sweet memories of her father. In the rare moments when she opened up about her father, her reminiscences were rather affectionate, reflective of a bond that is cherished.Like her father, Lisa Marie Presley left her mark as a singer and songwriter with a handful of memorable songs that will keep her memory alive in the hearts of those who loved her.

As the sole heir to a celebrated music legend, Lisa Marie Presley’s life was shrouded in fortune. However, her personal life often took tragic hues, the reflections of which are evident in her music. She wasn’t someone who settled for the comfortable bubble of the inherited fortune; rather, she built a commendable music career for herself. Her three albums, To Whom It May Concern (2003), Now What (2005), and Storm and Grace (2012), revealed her flair and finesse as a singer and songwriter. After the release of her debut album, critic Robert Hilburn praised her for her “stark, uncompromising tone” that made her music stand apart from the rest. The three albums also trace her growth and evolution as an artist and the gradual maturity her art has acquired with time.

While Lisa Marie’s career touched the skies, her personal life often assumed a greyer tone, with tragedy never leaving her trail. After losing her father at such a young age, she experienced loss in various forms, the most significant of which was the death of her son Benjamin Keough.The four high-profile marriages and their failures might also have added to the exhaustion.

“She is completely heartbroken, inconsolable, and beyond devastated… She adored that boy. He was the love of her life,” said a spokesperson for Lisa Marie at the time of her son’s death. Despite the losses that were enmeshed within the pages of her life, Lisa Marie Presley was a symbol of passion, determination, and strength.

Life is often preserved in art that is timeless and immortal. Here are some of Lisa Marie Presley’s most famous songs to remember her by.

“Don’t Cry Daddy”:  a song shrouded in grief and love, “Don’t Cry Daddy,” was released in the year 1997 to commemorate the death of her beloved father. The track is a tear-jerker as it tugs at the heartstrings of listeners. The personal touch that is reflected throughout the song and the raw emotions present make it a memorable track. Give it a listen here.

“Lights Out“: When art becomes personal, it begins to tell stories, and there is nothing that stimulates the human mind more than stories. This lead single is from Lisa Marie Presley’s debut album, “To whom it may concern.” Throughout the song, one can find bits and pieces of Lisa Marie Presley’s life as the daughter of a legend and her memories of Graceland.

“Gone”: Gone is easily one of Lisa Marie Presley’s best songs, brilliantly capturing her expressive style and ability to blend life and art in the most surreal form.Only those with the toughest of hearts can listen to the lines, “Well, what do we have here, Daddy… The lights are quickly changing,” without batting an eyelid.

“I’ll Figure It Out”: This is yet another song that demonstrates Lisa Marie Presley was more than just a child born with a silver spoon but rather a woman capable of carving out a niche for herself in the music industry.

“Shine”: This is a track from Lisa Marie’s 2005 album, Now What. The song leaves an indelible mark in the mind of the listener with its expressive beauty and poignancy.

Wednesday gives off Saturday vibes at the Globes