New York Gal » 10 Things You Should Know About Cynthia Nixon

10 Things You Should Know About Cynthia Nixon 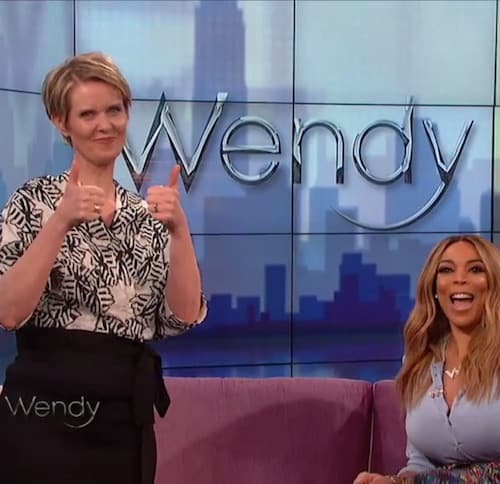 In the 90’s Cynthia Nixon stole our hearts as the ambitious attorney Miranda Hobbs on the hit show Sex and The City, but now she is taking a stab at politics. Since the series ended in 2004 Nixon has appeared in several films and in Broadway shows but she has also been involved in activism.

On March 9th Nixon, via a video on Twitter announced her gubernatorial candidacy in New York State. She recently stopped by the Wendy Williams show and discussed her accomplishments since the finale of her hit HBO show and where she stands on our countries most controversial issues.

Below are the top 10 takeaways from the interview.

1. She isn’t a natural redhead

On Sex and The City Nixon was known for her iconic red hair but divulged on Wendy’s show red isn’t her natural hair color. “The red is long gone,” said Nixon. “That was a Miranda thing, I’m a natural blonde with a little bit of help nowadays.”

2. There was a particular scene in The Sex and The City movie that devastated her

There is a scene in the film when the main character Carrie( Sarah Jessica Parker) who is obsessed with shoes and fashion is elated after her husband gifted her with a custom-made closet in their apartment. Nixon said even though the audience applauded and cheered at this moment it wasn’t one of her favorites scenes.

“To me, the show was so much about female empowerment and about women making their own choices and standing up for themselves,” said Nixon. “So for that to be the climax of the film that your wealthy husband built you a really nice closet for your clothes, I thought wow that’s not really what you love and this show is it because that is not what we are making it for.”

3. Nixon has many trophies

The thespian has won a Tony, Emmy and Grammy award and said she is only “a small Oscar” away from an EGOT.

4. Why she is running for governor of New York

“I love New York,” said Nixon. “And the election for Donald Trump was a real wake up call for women across the country that if we don’t like the way our government is going in we have to step up and we have to get involved like never before.”

5. She is definitely a New Yorker

Nixon was born and raised in Manhattan. She put herself through college at Barnard College in Harlem and her children all went through the public New York City School system. She even takes the subway every day

6. She has been fighting for better public school for 17 years

Nixon is a spokesperson for Alliance for Quality Education
An organization that pushes for high-quality education regardless of zip code. She has gone all across New York State speaking to legislators about improving public school education.

7. Her stance on gun control

“I think we are at a real watershed moment right now,” said Nixon. “We have good gun laws here but we just passed a budget and we did nothing to amend our laws and that’s why I’m running because there is an appetite for real progressive change in New York State.”

8. She acknowledges that black men are heavily impacted by gun violence

“I think to often our elected leaders they will talk about killings when its children in a school but not when it’s young men of color who are being shot by the police unarmed,” said Nixon. “I think when we say black lives matter we have to mean it and we have to implement change.”

9. She acknowledges how much black women contribute to the democratic party

“Black women for a long time have been the backbone of the democratic party and we need to let them lead because look what black women did in Alabama,” said Nixon. “Look at how they supported Hilary Clinton when white women didn’t at all.”

10. All of her Sex and the City costars support her run for governor

“Actually all four of them do because I am behind it too.”

Will you be voting for Cynthia Nixon in September for governor?