The Problems Women In Technology Are Facing Today

Learn a little bit more about some of the issues women in technology are facing! 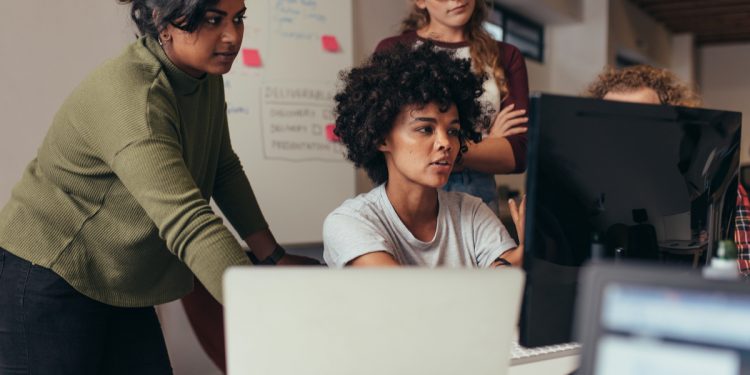 According to a report from McKinsey, it was that companies are at their best when they are diverse. It allows them to perform better, hire better talent, and be more engaged with their coworkers. This results in longevity in the employees with the company. Despite what this report proves, there is still a huge gap for women in technology in their field of work. This can mean both in terms of personal growth within the company and concrete issues such as the gap in pay.

Now more than ever, it’s important for companies and businesses to showcase their support for women in the workplace. This can be done through equal pay and benefits. However, the technology industry is one that may not take these new changes and adaptations in the work field seriously.

There are still these ongoing issues with women working in the tech industry that will be discussed in further detail throughout this article. According to data from the NCWIT, women make up 47 percent of all employed adults in the US. And, as of 2015, they only hold 25 percent of computing roles.

The Struggles For Women in The Tech Industry

According to a survey on ComputerWeekly.com, the percentage of women working in the technology industry remains low at 16 percent. In fact, it has been shown to have little to no growth within the past 10 years. The statistics showcase to the public just how low the number of female employees in the tech industry there is.

However, that’s not to say that the numbers are remaining stagnant in all sectors of the tech category. In fact, other categories under the STEM category including science, engineering, and maths have made small progress. There has even been overall growth in the number of females working in that particular industry.

Although that may be something, it is still far from equal for women working in the tech industry. Factors such as obstacles in career development as well as a crippling confidence gap make it difficult for women to advance in the work world compared to the male demographic.

The Confidence Gap & How To Break It

If you’re unfamiliar with the confidence gap and how exactly it affects women in technology, allow me to break it down for you. According to Insights Hub, 25 percent of women said confidence and visibility were the next biggest barrier (right under career development/progression) to achieving success in the tech sector.

It’s important that in order for companies to ensure that they have the best employees for the job that they review and survey each of their employees equally. That is where the issue of the confidence gap and the visibility issues comes into play. It makes it hard for women, specifically in tech to be considered for a job when they aren’t seen equally in the workplace compared to their male counterparts.

The Struggle With Career Development

Imagine having such amazing ideas and not having the opportunity to input them in your workplace. There is often a struggle when it comes to having the confidence to speak solely based on gender. However, this is not the fault of the females – it is a direct effect of the treatment and issues that they are facing. After all, they are still considered a minority in the workplace.

According to Women in Technology, visibly for women or people of color in the tech sector is unfortunately still low. This is often the case when specifically discussing senior roles. Because of this, an equal 25 percent of women in the tech industry have cited that they also struggle with career development.

Although there has been plenty of progression in this particular topic, women are still considered to be a minority in the workplace. With this label can, many women have reported harassment from both their male counterparts and even superiors. Whether it was due to “what they were wearing” or just the fact that they are female, this is not something that we as females are asking for, but something that we have to deal with.

Unfortunately, this makes one of the biggest struggles of females in the workplace out of their control. Coming from that same statistic, many women in the tech industry have also felt a generic sense of feeling out of the loop, or not included. 66 percent of women in tech felt excluded from key social and network opportunities due to their gender and 59 percent felt as though they did not have the same opportunities as their male counterparts.

Another negative thing that comes along with the underrepresentation of females working in STEM is the gap in pay. Sadly, as much as there has been some progression for women in the workplace, there is one thing that hasn’t changed. And that is is the difference in pay between females and their male counterparts. According to data from Pew Research, women earn 87 percent of what men earn in computing fields.

There is often a common misconception that women are more concerned with the benefits and flexibility that the job offers. However, this has been proven false – according to a report by the IDC. 52 percent of women care about compensation and pay compared to the lesser 33 percent of males. On top of this, 75 percent of the males felt that their employer offers equal pay compared to the 42 percent of females that do not.

Although there are still quite a number of issues for females in the tech industry, that’s not to say that change is not occurring. Now, more than ever, companies are changing in order to focus equally on women in the workplace. Especially for women in technology.

There has been an increasing amount of benefits that have been offered to females in the workplace. For example, a wider number of days of paid maternity leave have been offered by companies. This has been done in a wide range of categories, such as research and marketing.

There have also been a growing number of female support groups in the workplace throughout many business and companies. The purpose of these groups is to discuss the needs and wants of females in the workplace. They also provide opportunities such as women’s workshops. It’s really becoming all about female empowerment – as it should be!

What Can Be Done On Your Part?

Continue to speak up against equal rights for females in the workplace! Share statistics on the pay gap and continue to support your female coworkers and friends. If we all continue to raise awareness and use our voices, then change is bound to happen sooner than ever.

As a result of how far we’ve come, there are plenty of companies that offer some amazing benefits. Especially for all of their amazing female employees. Looking for places to apply? Check out this list here of some of the best places where women want to work!