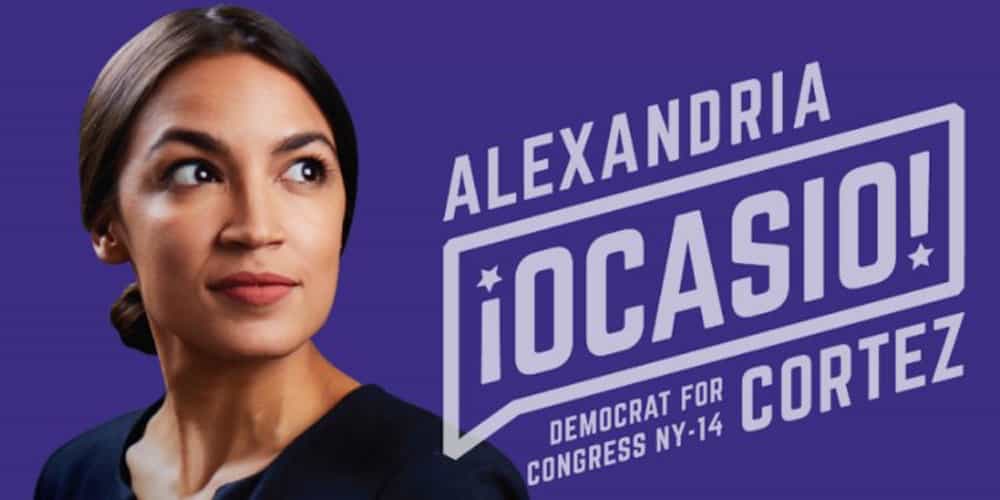 "Women like me aren’t supposed to run for office", begins Alexandria Ocasio-Cortez, in her campaign video for the primary elections held on June 26th.

Her video, much like other aspects of her campaign, further explain her roots: Born in the Bronx to a Puerto Rican mother and father from NYC, the family moved to suburban Yorktown so that Ocasio-Cortez would be able to meet ZIP code requirements for a better education.

“I was born in a place where your ZIP code determines your destiny,” she says in a scene where she waits for the subway.

The 28-year-old ultimately defeated her opponent Rep. Joseph Crowley with 57.5% of the vote. Crowley has served in Congress since 1999 and wasn’t able to show up to debates for the election, twice. Ocasio-Cortez is the first person to go up against Crowley in 14 years.

In the Bronx and Queens area, where Ocasio-Cortez will now represent, NPR reported that about 50% of the residents are immigrants, and the community felt severely neglected by their former representative. The inflation in the cost of living and housing isn’t being met by a parallel rise in salaries, which is forcing people out of their homes and making it harder for residents to stay afloat. The community needed someone who understood this and would help harmonize this and other issues they face.

"We’re having an affordability crisis in New York City," Ocasio Cortez said in an interview with NPR. "We have a security crisis with our current immigration system, and I think I was able to allow our community to really feel seen and heard, and visited and advocated for."

But who is Ocasio-Cortez and what does she stand for? What will she change? Here is a list to help better understand the hopeful candidate and her policies for Congress in the upcoming November elections.

She Understood Inequality From a Young Age

As previously mentioned, the Ocasio-Cortez family made sure their daughter attended a higher-ranking school than those in close proximity to where they lived. On her website Ocasio-Cortez is said to have, “ended up attending public school 40 minutes north in Yorktown, and much of her life was defined by the 40-minute commute between school and her family in the Bronx.”

It was on those daily commutes that she understood the difference just under an hour can make in terms of schooling, housing, healthcare and economic opportunity.

She Has Worked for Sen. Ted Kennedy and Volunteered for Bernie Sanders

During Ocasio-Cortez’s time at Boston University, where she earned degrees in both Economics and International Relations, she worked for the late Senator Ted Kennedy, dealing with immigration and foreign affairs. In a recent interview with Mic she spoke about her experience there, “I was the only Spanish speaker, and as a result, as basically a kid — a 19-, 20-year-old kid — whenever a frantic call would come into the office because someone is looking for their husband because they have been snatched off the street by ICE, I was the one that had to pick up that phone.”

In his 2016 campaign, Ocasio-Cortez was an organizer for Bernie Sanders. He congratulated her on her win.

Thank you so much, @BernieSanders!

At 22, after returning to the Bronx from university, Ocasio-Cortez opened Brook Avenue Press, a publishing agency for books positively portraying the neighborhood. Also, shockingly, up until February of this year, Ocasio-Cortez worked at Flats Fix, a taco restaurant in Union Square. She apparently worked there to help fund her campaign, rotating shifts around in order to attend meetings and fundraisers for the election.

She Wants to Ban Assault Weapons, Abolish ICE and Give Medicare to Everyone

Ocasio-Cortez is a Democratic Socialist, a party which evolved from the Socialist Party of America. The progressive millennial supports universal healthcare, free higher education, the banning of assault weapons, LGBTQIA and women’s rights, mobilizing against climate change, solidarity with Puerto Rico and lists housings as a human right.

She’s also a pacifist, “Alexandria believes that we must end the ‘forever war’ by bringing our troops home,” states her website, “and ending the air strikes that perpetuate the cycle of terrorism throughout the world.” See her platform here.

Conservative America Talks Live host, John Cardillo, who regularly tweets about his support of criminalizing those crossing the border illegally, tweeted a picture of Ocasio-Cortez’s Yorktown childhood home. “A far cry from the Bronx hood upbringing she’s selling,” He wrote in a condescending post to the recent election winner.

Her vehement response to Cardillo came less than an hour later, correcting him of his misinformed statement. “Try Google,” she suggested.

3. Your attempt to strip me of my family, my story, my home, and my identity is exemplary of how scared you are of the power of all four of those things.

Ocasio-Cortez joined others in a recent protest against the separation of families at the border in Texas. She knocked on doors until the soles of her shoes had holes in them, she spoke to new moms as well as people who have lived in the area for decades. She also spoke to people who the “experts” told her fail to vote, but did this time- for her.

The child detention camps are here – I confronted the border officers myself.

Using their names, I told them exactly what they are responsible for.

One of them made eye contact with me.
I spoke directly to him.
I saw his sense of guilt.
We can dismantle this.#AbolishICE pic.twitter.com/QLyc9MAnkt

She Supports Clean Funding in Campaigns

On Ocasio-Cortez’s website, one of her aims is to eliminate funding from corporate organizations in politics. She was endorsed by several liberal and Democratic groups in the city.

I won a nearly impossible race with:

Sometimes, the right thing to do *is* the winning thing to do. pic.twitter.com/1fq9nbMJAS

Bloomberg reported that her opponent raised $3.3 million during his campaign, whereas Ocasio-Cortez only raised $312,000, but despite this, she won the majority of the vote and will go up against Republican candidate Anthony Pappas in the midterm elections.

Summer Songs to Keep on Replay