The Emmys Have Announced Their Hosts and People Aren’t Thrilled 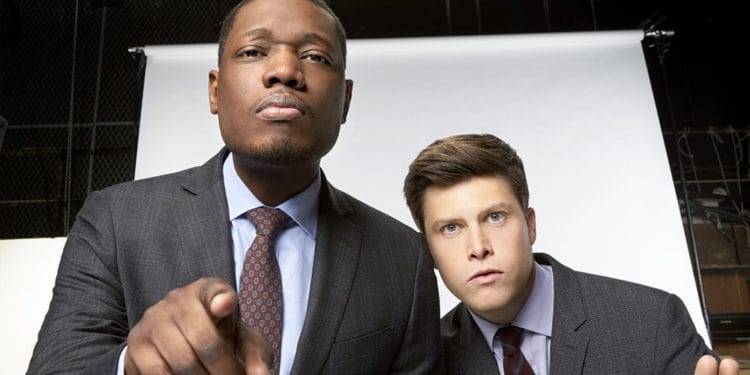 Since the Oscars are the official end to cinema awards season every March, as entertainment enthusiasts, we have the New York City theater community’s Tony Awards and television’s Emmy Awards to help sustain our unhealthy diet of celebrity accolades and fashion.

The nominations for the Emmy Awards have finally been announced, as well as the highly anticipated host. Or, in this case, hosts?

The last time there was a hosting duo for the Emmys was all the way back in 1999 with David Hyde Pierce and Jenna Elfman. I know what you’re thinking, and no, it’s not the incredible dream team Tina Fey and Amy Poehler, a duo that hosted the Golden Globes together back in 2013, although that would awesome; This year’s hosts are SNL Weekend Update co-anchors Colin Jost and Michael Che.

We know they can host an update like nobody’s business, but even more importantly, in today’s post-#Metoo world, doesn’t this announcement sound a little tone-deaf? No one seems to be questioning these two men’s abilities to lead the hosting charge; the point really remains as – why, two men, right now?

However, the last time any of the major awards show was hosted by women was the magical Fey/Poehler pairing for the 2013 Golden Globes, and out of the last 20 years in Emmy Hosts, only four ceremonies have been hosted by women.

4 women have hosted since 2000. 2 were Ellen. 1 was Heidi Klum and she hosted with 4 dudes. Get it together, Emmys. https://t.co/xVcLELHkRy

There are so many fierce, talented, hilarious women of all colors that can, without a doubt, carry the responsibility of hosting an awards show. Let’s not forget queen Kirsten Bell, who was the first-ever host this year of the Screen Actors Guild Awards, and who completely rocked the show. Not to mention, her absolutely incredible show on NBC, The Good Place, was nominated for not one, but two Emmys this season.

Or, since this year’s ceremony is being produced by Lorne Michaels, creator of SNL, he could have drawn upon the tour-de-force SNL queen Leslie Jones as a stunning host.

The official announcement from NBC comes with the tagline that other SNL casts members may pop up throughout the evening, which is how I’m assuming they’ll be able to get away with not having a female host or a totally female hosting team.

"NBC is thrilled to be the home of this year’s Emmy Awards and with Colin and Michael in the driver’s seat as hosts, along with surprise appearances by other cast members of Saturday Night Live, I think we are in for one of the funniest awards shows in a long time," said chairman of NBC Entertainment Robert Greenblatt.

Although they’ll be able to bring up current female SNL cast members like Leslie Jones, Kate McKinnon, and Cecily Strong, it’s just not enough. The Twitterverse, of course, was up in arms over the announcement.

It’s too bad there are no funny women on SNL who could’ve hosted the Emmy’s this year https://t.co/IDyg5WhyH0

When you see that Colin Jost and Michael Che are emceeing the Emmys pic.twitter.com/8V3zRCLTql

No one is saying that hilarious white men shouldn’t have the opportunity to do what they love and make people laugh. They should.

What the world is simply asking, for now, is that everyone else gets their opportunity as well. That’s not too much to ask, is it? We don’t think so.