Need help deciding what to wear on Halloween? We got you covered. 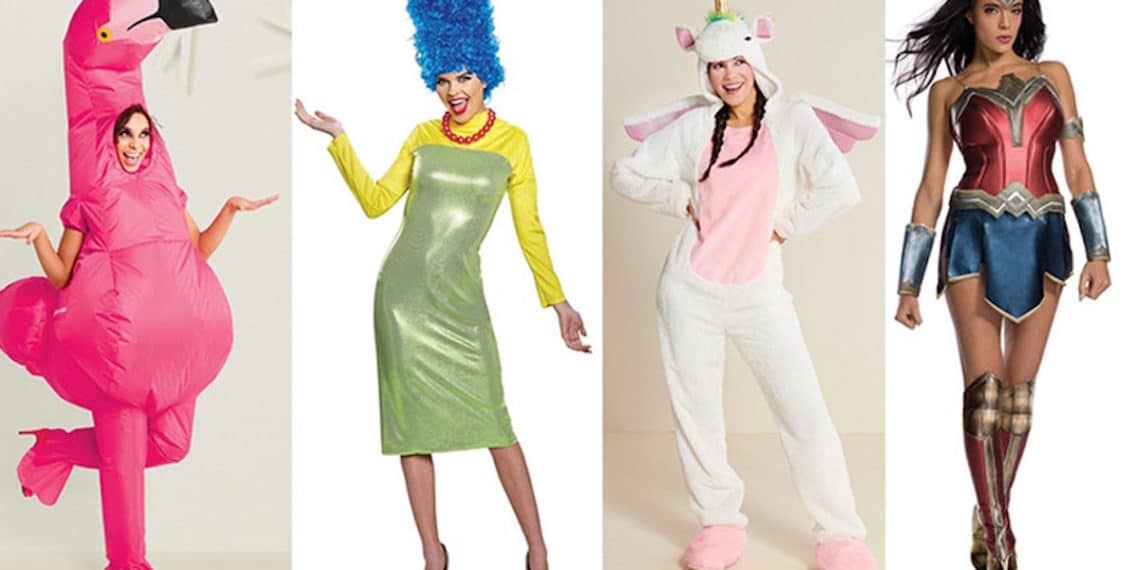 The most universally adored holiday is approaching. Even though this looming heat of summer seems reluctant to leave, we’re only fourweeks away from Halloween. Carving pumpkins are being stacked on top of one another in stores and “spooky” paraphernalia hasfinally replaced the 4th of July and Memorial Day weekend decorations.

Everyone is ready to throw on their sweaters and jeans. And everyone is ready for the hurdle of Halloween, Thanksgiving, and Christmas to begin. It’s only 11 weeks away BTW, not that we have a countdown app that tells me or anything.

But for now, let’s not get ahead of ourselves and focus on the near, cooler, future. If you’ve been paying attention, there are a few issues surrounding this holiday- and it isn’t because this year it falls on a Wednesday! Do we celebrate both weekends?

Namely, the insensitivity of other people’s culture and religion is affecting the way in which people celebrate Halloween and the topic of dressing up in general. Until recently, political correctness was an un-muttered term, and people were free of repercussions when, for one day of the year, they deemed it acceptable to dress as a certain “culture” for fun. Minus any of the respect or traditions that were associated with them. Certain “fun costumes” include dressing as a Native American (complete with a headdress), a “geisha” costume or an Arab Sheihk. Scott Disick, I’m looking at you.

NYGal wants to assist any person that might be confused or afraid as to what to wear to a Halloween party this year.

It really isn’t that difficult and if you need to ask then it probably isn’t worth wearing. For example, maybe this year it isn’t the best year to dress as a police officer, after the rise in police brutality coverage. Not to mention the unrealistic and sexist differences between the male and female “career” costumes, which urged mom, Lin Kramer, to write an open letter to popular costume store asking them to redesign certain things.

“When you look around at the police officers in your city or neighborhood, the uniforms they wear are probably substantially similar to the costumes you have elected to offer for boys. However, the same cannot be said of the costume you market to girls. Generally speaking, real life uniformed female police officers do not wear short skirts and low cut shirts, but instead wear exactly the same slacks and shirts as their male counterparts.”

Can you imagine trying to chase “bad guys” in those heels?

Which is why we’re here to help you find the perfect Halloween costume that has the NYGal seal of approval. Scroll through for complete costume ideas made for groups, couples, women and even DIY!

If you have enough friends that are willing and able to be in the same place at once and dress up in a group, well done. There really are SO many ideas. But to stay on track with being non-offensive, we suggest trying movie characters. Such as The Incredibles! Or even Spongebob and his gang.

Another idea to avoid representing something you wouldn’t want to is having a themed costume night. Pick a theme, like the 20s, for instance. I’ve always wanted to dress as a flapper girl and have an excuse to wear a faux feather boa. There’s plenty of variety to pick from on this website so no one will look exactly alike.

For a large group of girls, why not go all 90s and do a Spice Girl themed night. Buy the famous Union Jack, Ginger Spice, dress from Whole Sale Halloween, here.

A group of three is enough to dress up as a bunch of female-led popular characters. Relive your childhood dreams and dress as cartoon characters from Totally Spies or The PowerPuff Girls. A less PG version would be to honor the aforementioned and best film ever: Mean Girls. For this, you’ll need a bunny costume, a cat costume, a mouse costume and whatever Lindsay Lohan was.

While most of these costumes are incredibly sickly, I’m sure they’re fun. This is your way of telling the world that you’re serious enough to wear matching costumes, which I’d say is pretty serious. Ever wanted to be an egg and your partner bacon? What about a peanut butter and jelly sandwich?

These are hilarious and aren’t limited to romantic couples alone. I often think of the scene in A Cinderella Story where the salt and pepper shakers fall down the ballroom stairs and then sneeze.

There really aren’t enough of these costumes and one day I hope to convince someone to dress as my pepper. My personal favorite since browsing through the hundreds of ones on Oriental Trading is the Luigi couple’s costume because it doesn’t make any sense, really. Why not Luigi and Mario? Either way, I don’t care, because two Luigi’s are better than one.

To take it to a more serious and sexy level. Be a pair of vampires and relive your 13-year-old Bella and Edward fantasy. Don’t pretend you don’t know what we’re talking about.

If you aren’t appropriating a culture or wrongly offending anyone, wear what you want. As we all know

“Halloween is the one night a year when girls can dress like a total slut and no other girls can say anything about it.” – Mean Girls

Be a bunny if you want to, or a cat or even a banana if showing skin isn’t your thing.

For more known and less intimidating looks, try any children’s classic costumes. Such as Red Riding Hood, Goldilocks or Rapunzel. If you were anxious about trying out wigs now is the time and a perfectly suitable excuse, because no one will find it odd if you suddenly grow a few inches of hair and bangs overnight.

Following with the classic costume theme, why not actually dress “scary”, in this skintight skeleton suit from Dolls Kill.

Or this “Jungle Kitty Sass” outfit, with a mesh center, exposing just the right amount of sass for a late October night.

To remain the only person wearing your costume throughout the night- try something a little unique. This quirky Pabst Blue Ribbon (or version of it) costume will definitely make for a few conversation starters at the bar.

If you don’t want to buy a full outfit, there are plenty of costumes accessories that can be added to an LBD or a black jumpsuit. Think ears, wings, masks, hats, and props. Like a broom that won’t cost much but will save you the itchiness of certain costumes. This leopard mask from Halloween Wholesale Costumes is only $8.90! It would go with pretty much anything and means you won’t have to put makeup on your whole face. Just remember your setting spray if you do. Look at that cute little nose.

Be creative and have fun. Even if you end up wearing an old tiara and a princess-like dress. Prime that shit and have it by tomorrow.

Website Real Simple, also has a list of DIY innovative ideas that will make it look as if you have your life together and knew Halloween was coming.

On top of that, they are surprisingly hysterical. Like the “Throwback Thursday” idea. It has the word Thursday written on a plain T-shirt with the addition of a bandage around wrapped around you. They recommend moaning about the pain in your back all night to fully immerse yourself in the outfit.

How about this one, that is a take on J. D. Salinger’s, Catcher in The Rye. If you have an old baseball glove laying about and some rye bread, you’re set.

So what is insensitive to wear on Halloween?

Cultural appropriation isn’t hard to figure out. Like we said earlier, if you have to ask yourself if it’s inappropriate or not, it probably is. There are a few different definitions of it as well. The standard Oxford Dictionary definition is…

Yet, other places have adopted their own definition, further detailing it. Everyday Feminism incorporates social hierarchy into their definition, writing that it’s a…

“particular power dynamic in which members of a dominant culture take elements from a culture of people who have been systematically oppressed by that dominant group”.

Like many controversial subjects that fall under the umbrella of political correctness, the limit on how far this should go, or the varying levels of seriousness is often wondered by society, and of course, Fox News.

Should certain pet costumes be sensitive and condemned? Well, if there offensive, then yes. But say, if, a child that was participating in the local ‘trick or treat’ tradition wanted to dress as a Disney princess, like one of the more current and popular characters, Moana. Would it be fair to argue that they were appropriating a culture and not dressing as a character?

This divisive debate, particularly about children’s costumes, caused an uproar at Yale University over an email sent out by Erika Christakis, a lecturer in early childhood education that lived on campus. Although she makes valid points, asking why and if we need to tell university students what to dress up as at Halloween (because I believe she hoped that they should already know better), it’s clear she thinks the holiday has grown to be too delicate.

“It is hard for me to give credence to a claim that there is something objectionably ‘appropriative’ about a blonde-haired child’s wanting to be Mulan for a day. I suppose we could agree that there is a difference between fantasizing about an individual character vs. appropriating a culture, wholesale, the latter of which could be seen as (tacky)(offensive)(jejeune)(hurtful), take your pick. But, then, I wonder what is the statute of limitations on dreaming of dressing as Tiana the Frog Princess if you aren’t a black girl from New Orleans? Is it okay if you are eight, but not 18? I don’t know the answer to these questions; they seem unanswerable. Or at the least, they put us on slippery terrain that I, for one, prefer not to cross.”

She did cross them, though, the minute she sent out that email purporting to understand minorities qualms. Which is why when thousands of people at the university, faculty, and students, demanded her and her husband’s resignation, it didn’t come as a huge surprise.

Her nonchalant remarks miss the point that Halloween hasn’t always been the best time for non-white individuals that were once unheard. Those that got to see their cultures and traditions mocked by a drunken frat boy named Chad throwing up from drinking too much light beer in a native headdress or garments.

We trust you to do the right thing!

Lb Cosmetics: the Canadian Brand That Enhances Your Natural Beauty

Pamper Your Skin with These Pumpkin Spice Beauty Products