Everything you need to know about Selena Gomez and Drew Taggart 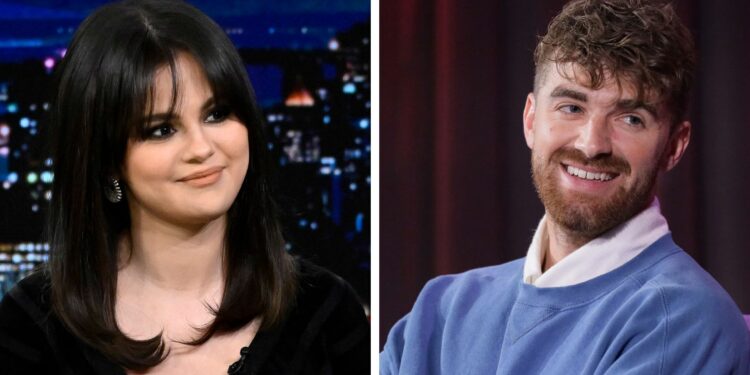 Rumors have been floating around that the “lose you to love me” singer, Selena Gomez, and The Chainsmokers’ star Drew Taggart are evidently dating! The “Barney and Friends” star and Taggart are yet to comment on this.

The New Couple In Town

Selena Gomez’s history of relationships is no secret to the media or the public. She has dated Orlando Bloom, the handsome elf of our dreams. Selena Gomez and Charlie Puth were unmistakably the cutest couple on the planet while they were together. But unfortunately, Puth told the press after they broke up that he was not the only one in her heart. She dated Nick Jonas for a brief period of time, and she also starred in one of his music videos called “Burnin’ Up” after they had broken up. The duo, though, did not let that affect their professional lives. Niall Horan and Selena Gomez were spotted on a date in 2015. They were also spotted getting cozy and kissing each other at a party then. But Gomez denied these, telling the media that they go way back and are just friends. Selena was with Taylor Lautner (because who doesn’t like to date a good-looking werewolf?) during the time he was shooting for his movie Twilight. What eventually ended their relationship was too much public involvement in it. Another talked-about relationship of Selena Gomez’s is that with Zedd. Their relationship was confirmed by Zedd only after they had split up. When they were dating, they were always found on each other’s social media, and he also posted a picture of Gomez in bed! This too went downhill due to the public interfering a lot. Perhaps, the stars keep their relationships under wraps for a reason.

The Monte Carlo actress has made headlines for her relationships with the weekend and, most notably, Justin Bieber. She has been very vocal about the final breakup that took place between her and Bieber in 2018, following which he met his current wife, Haley Baldwin. Gomez and Bieber have had an on-and-off relationship since 2011. Selena told the media about the split and also discussed the problems she was facing due to her physical and mental health. Selena Gomez’s best friend has expressed her dislike for Bieber both directly and indirectly. Gomez has had a very successful career, having entered the industry as a young girl, experimenting with singing and acting, and finding success in both. Even though she was partially active between 2015 and 2020, her fans call her album in 2020 a comeback! But after her breakup with Justin Bieber, she has reportedly been single until now!

Like Gomez’s dating life, Taggart’s is also an open book that comes under public scrutiny quite often. Taggart was in the headlines previously when he had what was called a “fling” with closer’s co-singer Halsey. They were seen getting closer during their live performance of the song, and it definitely made their audience very happy! Apart from Halsey, Drew is believed to have relationships with Meredith Mickelson and Chantel Jeffries. He also had a brief period with Haley Rowe. The most recent relationship Taggart is said to have had before Selena Gomez is that with Eve Jobs, daughter of Apple’s founder and CEO. Eve is an American model who has finished her education at Stanford University. Drew and Eve’s relationship was not hidden either. They used to post about each other on social media too. The most recent post was about them taking a trip to the north pole together. Both of them posted images where Drew mentioned it was his birthday trip. When news of Selena Gomez and Drew Taggart became public, Jobs allegedly deactivated her Instagram account.

Drew Taggart’s career has been quite an interesting one. He got a degree in music and entertainment from Syracuse University. His mom has gone on record to tell his fans how interested he has been in music since he was a kid. He and his friend and co-member of The Chainsmokers, Alex Pall, started the band in 2012. Since then, they have received success in many forms, the first of which is being the highest-paid DJ in the world. They earned around 50 million dollars within the first 8–10 years of starting the band. They have had some immense success with their songs like “Don’t Let Me Down” and “Closer.” It aided them in winning a Grammy for the same. He has had quite the career. Both band members express dissatisfaction with the narrative that has been created around them of being hard-party people. Taggart told the media that they are not like that in real life at all. Both of them made headlines again when Taggart spoke about the threesomes they had with the fans they met in his “Call Her Daddy” podcast. They both agreed on the fact that these encounters with fans were never planned but always impromptu. Coming back to the dating life of Taggart, he has not given any public statements as of now.

Living In the Moment

Only a few days after Taggart posted about his trip with Eve Jobs, he made headlines for dating the calm down artist Selena Gomez. How exactly did this happen? The duo was spotted kissing in a bowling alley! An insider provided the information that the couple is not hiding their relationship but instead showing it off. It also came to light that they are into PDA and are not sneaking around. In fact, they even went on a movie date and, of course, bowling. A fun fact about the two is that they have not followed each other on Instagram or any social media yet. They are keeping their relationship low-key and casual for the time being, according to information revealed. It is said that Selena can hardly keep her hands off him, and they are enjoying themselves quite a lot! We are definitely excited to see where it goes and are waiting for more information!

How To Bounce Back After Exercise Or Sport Injury