She's just THE BEST, and here's why! 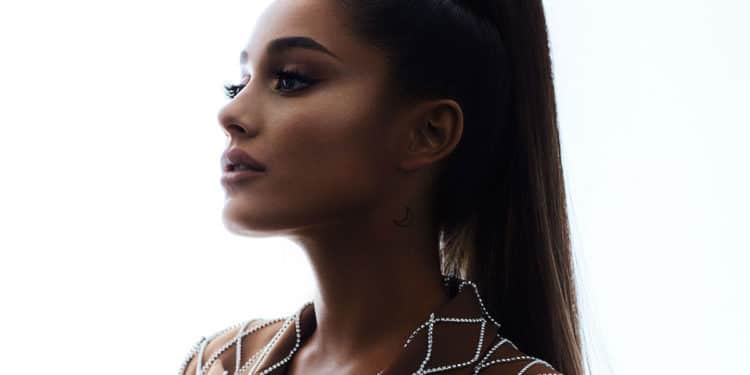 Like most people, my first introduction to Ariana Grande was in the Nickelodeon show Victorious, in which she played Cat Valentine. Although she played the role well, the show and her character were ditzy, forced and full of eye-rolling catchphrases. If the show had come out a few years earlier, I may have enjoyed it, but I was 15 when it first aired and had already stopped watching Nickelodeon by then.

Still, I knew who she was and knew that she could sing. Really, really sing. It wasn’t until The WayfeaturingMac Miller, though, that I fully saw and heard her without being tied to any Nickelodeon canned laughter contracts.

Through her voice, her hair (that has 9,250,000 Google Search results), her cat ears and an alluring line between cute and sexy, Grande proved that she was, in fact, a 20-year-old artist and “someone to watch”. That kiss with Miller may have also helped sever any child star-ness left in her image.

Ariana now has 137 million Instagram followers and 59.3 million Twitter followers. Thethank u, nextvideo has over 119 million views. 50 million of those viewings being in the first 24 hours, earning it the biggest music video debut in YouTube history.

The singer has a gargantuan amount of accolades, that she rightly deserves. Throughout her career, Ariana has dealt with tragedies such as the Manchester Arena attack, killing 22 of her fans, and mourning the loss of her ex-partner Mac Miller. Grande is only 25. Something that I think we forget, even though she could pass for 18. She’s managed to handle situations no one could be prepared for, especially at such a young age.

Grande is a sunny, giggling, animal ear wearing symbol of hope that fans and, most importantly, she needs today. Here are a few reasons why we love her: 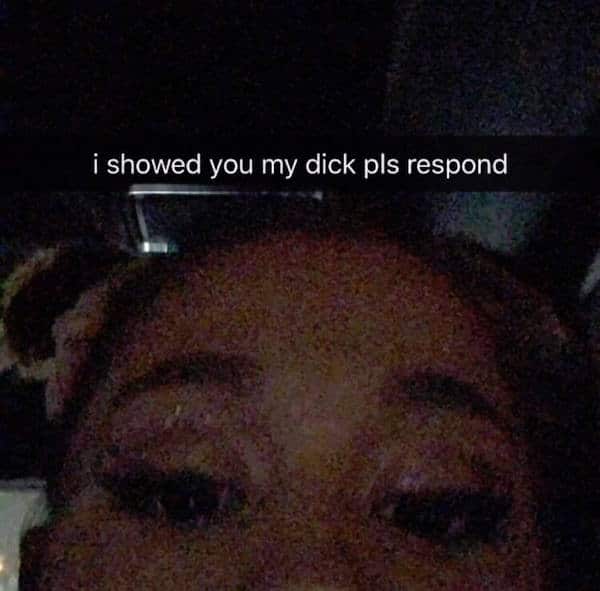 Grande’s social media is an eclectic mix of promotion, animals, her life and, thankfully, memes. As well as an occasional funny video, Grande loves to laugh at herself through our generation’s greatest creation. One of my favorites is her take on an original meme “I showed you my dick pls respond.”

This caused a lil’ bit of controversy online and was only a few weeks after her joking about the size of Pete Davidson’s penis, which she later deleted.

As she said in a tweet about the meme, ” i know ALSO i didn’t make it? i found it and posted it bc it was funny relax immediately”

A few years ago Grande was involved in a doughnut scandal. She licked one in a bakery whilst the server wasn’t looking and said she hated America. 10/10.

She’s the first to speak up about feminism 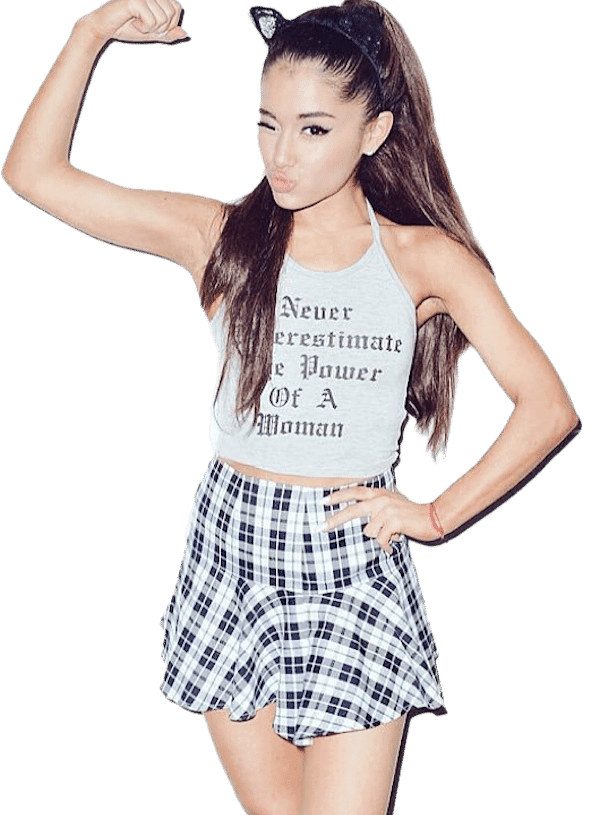 In an industry that is largely owned and directed by men, Grande has had multiple public incidences of correcting and educating people on feminism. It’s unfortunate that such a successful, kind natured woman still has to regularly explain herself and remind people of double standards, however, I’m grateful at how outspoken and passionate she is about it.

In 2015, after her and Big Sean’s relationship ended, she posted her own “feminist manifesto” on Twitter. In the lengthy Twitter post, Grande wrote about how she is from a “long bloodline” of feminists. Adding how she is:

“tired of living in a world where women are mostly referred to as a man’s past, present or future PROPERTY/POSSESSION.”

There’s an entire Buzzfeed article dedicated to the 19 Times Ariana Grande Shut Sexism The Hell Down. Not once, but twice Ariana Grande brushed off Ryan Seacrest’s sexist and prying comments on his radio show. Also, on Power 106 Los Angeles, Grande, laughed at hosts when they asked her what she would choose between using make-up or her phone for the last time. What an imaginative question, right?

Furthermore, the God is A Woman singer attended the Women’s March in Washington, D.C. last year with her Nonna. Precious.

If, and this is veryhypothetical, I were Ariana Grande and had been through what she had, I would be under my duvet crying. It would take years for me to pick myself back up again. Not only did her engagement to Pete end, but she had to deal with it publicly. As in, every single media outlet wanted to see how she was and get the latest “scoop”.

It’s a good thing I’m not Ariana Grande because I’m too sensitive, unphotogenic and I really can’t sing. Instead of wallowing, which I’m sure she gave herself five minutes to do, Grande picked herself back up and wrote the most optimistic, encouraging song 2018 needed, thank u, next.

She mentions more than one ex, without being rude, and spins her failed relationships into a celebration of what she learned and will continue to learn through love.

One taught me love
One taught me patience
And one taught me pain
Now, I’m so amazing
I’ve loved and I’ve lost
But that’s not what I see
So, look what I got
Look what you taught me
And for that, I say Thank u, Next

She loves what she does 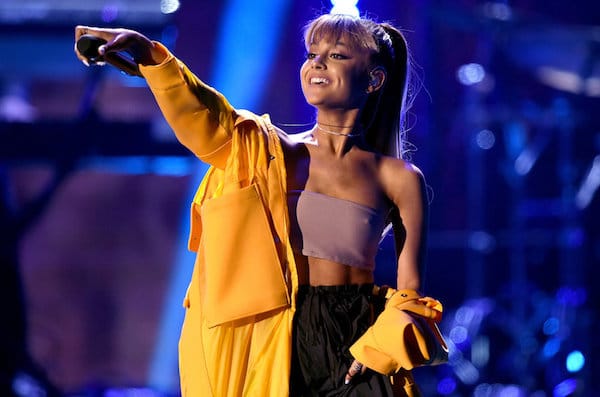 No one is more enthusiastic about Grande’s music than she is. Her excitement to share music and art with people is so genuine that her self-promotion is far from banal. She spends weeks dropping “clues” and references to her upcoming releases and then revels in the memes that follow.

Grande regularly likes to share covers, choreography, and drawings done by fans that are appreciating (and crying over) her music.

Her transparency allows her followers to see just how much of herself she puts into her work. She’s almost never resting. She’s already recording her thank u, next album, just weeks after releasing Sweetener. However, none of this seems hard for her. She may have used the hashtag #haventsleptinyears but it all seems worth it; her love for what she does is palpable in both her work and persona.

She shares/cares so much for her fans 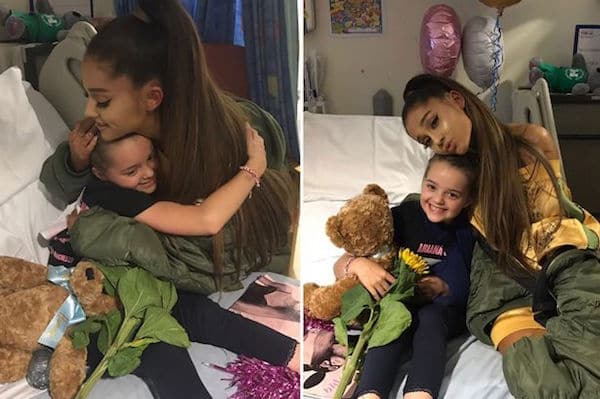 As I’ve mentioned above, Grande is constantly engaging with her fans through social media. Whether it’s sharing memes, replying to tweets or encouraging others, she’s always present. To an onlooker, this seems absolutely exhausting. To someone who finds social media draining, it appears even more exhausting. I find it hard to reply to a text from my mum, whereas Grande will happily reply to multiple fans and doesn’t seem reluctant at all.

I hate to say it, but she’s a millennial and so are most of her fans, so her way of interacting online and always being engaged is something that works. Most of her fans are even younger and use their phones a lot, so the Grande updates help her stay in focus as well as seeming more relatable.

After the Manchester Arena attack, Grande has inconsolably heartbroken. To honor fans, those affected and the city of Manchester, she held a tribute concert and organized it fairly quickly. Instead of never leaving the house again, she knew her fans needed it. Grande put them first.

She regularly posts about her family; Grande brought her mother, cousin and Nonna onstage at her stupefying VMA performance this year. Every time she goes on tour, she records all of it, to share later with fans. It seems as though apart from her love of what she does, it’s her fans (are we still calling them Arianators?) that pull her through.