6 Shows You Have To See On Broadway This Year 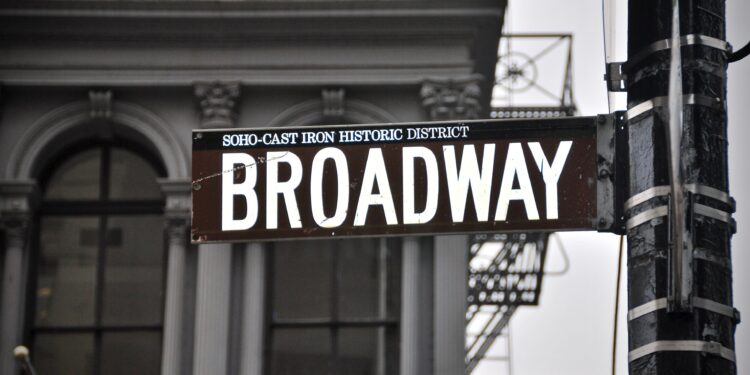 Photo by Jordhan Madec on Unsplash

When you think of New York, there are several things that come to mind: the Empire State Building, the Statue of Liberty, the bright lights of Times Square, and, Central Park

Then, of course, there’s Broadway.

In fact, New York nightlife is practically synonymous with Broadway. It truly is one of the best places on earth to catch a live show.

And best of all, these shows are always changing, and there is always something new and exciting to see on the stage. So what shows could (and should) you be watching this year?

Well, here is our list of six must-see Broadway shows in 2023.

Be sure to get your tickets before it’s too late!

The Book of Mormon

For those of you who love to laugh, the creators of South Park have teamed up with Avenue Q’s Robert Lopez to create something wickedly funny. The Book of Mormon is a satirical musical about two Mormon missionaries who optimistically try to convert unsuspecting locals in a remote Ugandan village.

And yes, it is as whacky as it sounds, with a hilarious soundtrack to add to the experience.

With songs like ‘Baptize Me’ and ‘I Believe’, this musical is as uplifting as it is funny. A truly one-of-a-kind show that you’ll want to see again and again.

This year, The Book of Mormon will be showing at the Eugene O’Neill Theatre between January and May. There is an estimated running time of two and a half hours, including an interval.

It is also worth noting that due to the use of foul language and adult themes, this show is only suitable for those aged 16 and over.

Didn’t like Shakespeare’s Romeo and Juliet when you read it at school? Then this is the show for you. In this modern twist on the old classic, Juliet sets off to travel across Europe with friends, leaving her ex Romeo behind, or so she thinks.

If you’re bored of tragic tales about helpless heroines, then you’ll love & Juliet. Showing at the Stephen Sondheim Theatre, the show will run for the majority of the year between January and November.

The run time for this show is about two and a half hours with an interval, and though this is a family-friendly show, it does contain some strong language that adults should be aware of.

This adaptation of the Disney classic transports you from New York to the magical plains of the Serengeti. You’ll join Simba and his friends on his adventure to becoming king of the pride lands, with a visually spectacular display of costumes, puppets and scenery.

As well as the familiar storyline, you can sing along to some classic songs, as well as some new ones from South African composer Lebo M.

This is a truly one-off theatre experience and one you won’t forget in a hurry. So grab your tickets and get on down to the Minskoff Theatre, where The Lion King will run from January to July 2023. This is the ideal show for families and has a run time of two hours and thirty minutes with an intermission.

Chicago is the longest-running American musical in Broadway history – and for good reason.

Follow the story of Roxie Hart as she navigates life in a woman’s prison, becoming a star and, most importantly, getting away with murder. Her thirst for fame borders on obsession, driven by the charismatic lawyer Billy Flynn and her competition with singer Velma Kelly.

The tale is told through show-stopping songs and captivating choreography in a show that will have you gripped from start to finish.

Showing at the Ambassador Theatre between January and July, the run time is around two and a half hours with an interval. Due to the nature of some scenes, this award-winning show is recommended for viewers aged 13 and over.

Aladdin is another Disney adaptation that will be taking to the stage in 2023. This is the fun and humorous tale of a boy from the streets and the Genie who changes his life.

As the story goes, when he finds a magic lamp, Aladdin is presented with the opportunity to make his dreams come true. But with just three wishes, he needs to make good choices.

The show features songs from the Disney classic, including ‘A whole New World’ and ‘Prince Ali’, as well as some unforgettable tunes that were written just for the stage. Fall in love with this enchanting adventure at the New Amsterdam Theatre, showing between January and August.

This is another family-friendly show, though it is recommended that viewers are aged eight and up. The run time is around two and a half hours with an interval.

The critically acclaimed Moulin Rouge! is returning to the stage this spring and will be showing at the Al Hirschfeld Theatre between January and May. This extravaganza of pop hits and impressive medleys tells the story of Christian and Satine, star-crossed lovers wrapped up in a world of luxury and grandeur.

Set in Paris at the turn of the 20th century, the choreography, costumes and set ooze passion and excess in a musical that will have you singing, dancing, laughing and crying.

However, due to some of the adult themes, it is recommended that viewers are over the age of 12, and the run time is around two hours and 35 minutes in total.

Of course, these are just a few of the wonderful shows on Broadway this year. You can find out more about some of the other great shows on stage this year, and start looking for the perfect tickets.

10 Reasons Why You Should Watch Emily in Paris