The Best Steak in New York is Located On The Upper East Side, XOXO

A New York strip fit for a king. 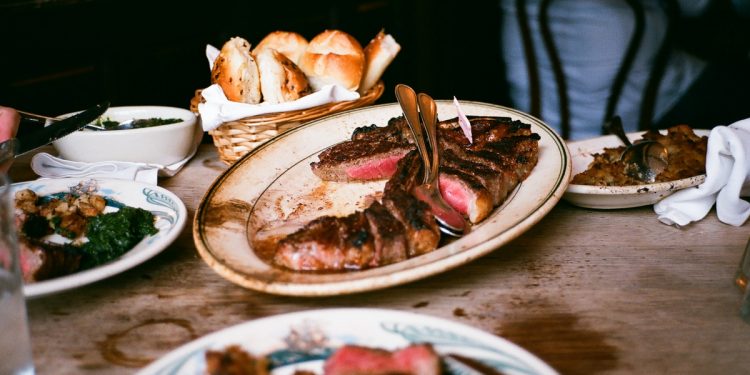 Steak in New York is a time-honored tradition with some of the most famous steakhouses in the world nestled here within the five boroughs. From Peter Luger’s in Brooklyn to Quality Meats in Midtown, this town is filled with options.

I’m saying – forget them. The only place you need to go is called Le Relais de Venise L’Entrecote. I’d stick to google maps if you don’t know french.

Le Relais de Venise L’Entrecote is located at 590 Lexington Ave in Midtown East. It is a corner oasis on a sunny corner between towering skyscrapers.

The French restaurant originated in Paris, France in 1959 when a winemaker, named Paul Gineste de Saurs, wanted to diversify his revenues. He partnered with a friend of his who was a chef, that made a ‘special sauce’ he liked and they opened the restaurant with a limited menu.

The restaurant has classic french decor and the waiters all dress in typical black and white french bistro attire.

Les Relais now has locations all over the world, including London, Paris, and Mexico City. Pre-COVID you would always see lines out the door waiting to be served. When I went to Paris in 2018, we stopped by and the line was around the block.

But absolutely worth it. Now you can just make a reservation.

The menu started with a salad, steak, and fries, and of course the special sauce over the steak. This same menu remains in all their restaurants today, with other additional offerings such as dessert, cheese platters, and an amazing wine menu.

If you were to order the “Porte Maillot” it will run you $31.95 for a feast for one. You are brought a delicious warm baguette and butter for the table to start you off. Then, out comes a delicious green salad topped with walnuts and mustard vinaigrette.

Next is the steak frites drenched in the special sauce. You only have three options for the temperature of the steak, rare, medium, or well done. I prefer medium, but whatever you like – they offer!

After you receive your steak frites and have happily eaten, the waitress takes your plates and tops your plate with MORE steak and fries. I call this second dinner. This second portion is included in your meal, so have another helping or save it for a midnight snack.

When I say this special sauce is life-changing, believe me. You will be dreaming of it for nights to come. Les Relais is tight-lipped about the sauce but many have made a guess.

If I had to take a guess, I’d say the base is a Béarnaise sauce with dijon mustard, garlic, green peppercorns, parsley, tarragon, and possibly even chives, in addition to thyme.

During COVID-19, the restaurant innovated a ‘sandwich’ variation to their menu, which includes the steak and fries on a baguette. It sounds weird, but it’s AMAZING.

Their desserts deserve some praise as well. Two of the best desserts they offer are the creme brulee and the profiteroles. Profiteroles are cream puffs drenched with chocolate sauce all over them. So, heaven.

Le Relais De Venise L’Entrecote is also home to one of the filming locations of the Marilyn Monroe film, The Seven Year Itch. Specifically, the iconic scene where Monroe’s white dress blows up due to the subway grate.

Apparently, hundreds of spectators came out to watch filming on September 15th, 1954. The director reportedly shot the scene fourteen times to get it right, and each time the crowd (mostly male) would cheer loudly whenever her skirt was blown up by the wind.

Famous people can often be seen dining at Le Relais all over the world, from Helena Bonham Carter to Love Island contestants. So take the train up to midtown east, and feel like a character in Gossip Girl as you munch on the finest steak New York has to offer.

From Suffragettes to Chanel: The Legend of the Pantsuit